The Math of Learning Math
Cost of Private vs. Public Education

The subject of education is an emotional one, often debated and dissected in heated conversation. The educational journey a child takes from kindergarten through high school graduation presents many challenges along the way. The decision to go with public education or private education is one of those challenges. Side-stepping any controversial benefits or flaws in the public vs. private education system, I wanted to create a simple cost analysis of the expenses a parent might be exposed to in both systems.

More importantly I wanted to examine the true costs a parent would be faced in their decision for public vs. private education. This translates into using a pre-tax dollar amount needed to fund private education because costs are typically not tax-deductible; therefore it is funded with after-tax money. However donations to public schools are often itemized as a charitable deduction. This article illustrates only the costs from grades K-12.

This analysis was compiled using sampling data from multiple Las Virgenes School District, CA (LVUSD) parents and information aggregated from public information posted on private school websites. In some instances, private school data was not available for certain grades so only the applicable data was used. For public schools, the cost factor utilized was based on an annual “Ask” donation amount. The “Ask” amount is a suggested donation, not mandatory cost, and request by each school’s parent teacher associations. Additionally, many public schools’ “Ask” is for a family, not per child, whereas private school is usually on a per child basis. For private schools we have also included the cost of application fee/new student fee. The following additional costs have been excluded: textbooks, school uniforms, private lessons, extracurricular sports and activities, special trips or other ancillary expenses.

For the pre-tax factor we used a combined effective rate of 36% to represent state and federal taxes. Other factors include a 4% rise in tuition and donations each year for private and public schools, even though statistically private school has typically been higher than public. One time enrollment or application fees were not inflation rate indexed. In comparison, according to the College Board, tuition at private colleges has increased 13% over inflation in the last five years.1 FinAid.org lists the overall average college tuition increase to be 8% per year.

The tables attached in the appendix show the possible tuition and donation expenditures of the education process starting with kindergarten in the 2018-2019 school year all the way through high school graduation. A 4% rate of tuition inflation is used throughout the model starting with K (kindergarten) at current prices. To account for different schools not having all the same grades, (e.g., a high school offering grades 9-12), inflation was calculated based on the current tuition and donation amounts to reflect what the child entering kindergarten in the 2018-2019 school year would face when entering that grade level. Please see table 1 for more information. Based on the above factors, the average dollar amount needed to educate a child from grade K-12 is the following: 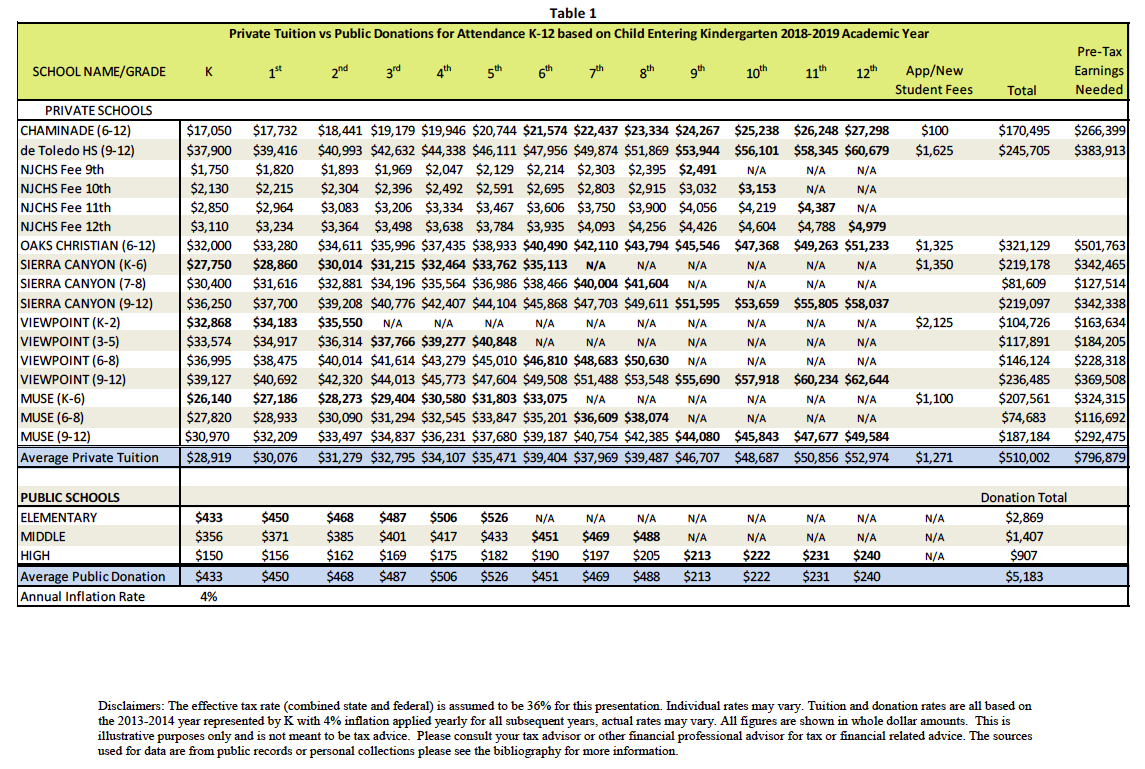 *Reflects the pre-tax dollars needed based on a 36% combined effective rate About the author – Ian Goldey, is currently a principal of Goldey Capital, a Registered Investment Adviser (RIA) based in Calabasas CA. He is married with a young son who attends public school within the LVUSD district, and has resided in the general area for 50 years. Mr. Goldey is also a volunteer board member for www.TheFoundationLVS.org. Ian Goldey is passionate in his approach for using statistical facts to help illuminate financial decisions.